Why I Came to Focus on North Nashville for Affordable Housing

North Nashville, once a thriving community, was known for the array of black-owned businesses along the Jefferson Street corridor. The street was exuberant, hopping with people of all ages and income ranges: business owners, their patrons, doctors, students from Fisk University, the Jubilee Singers, Meharry Medical College, and the historically black-attended, Tennessee State University.

For decades this was how it was. Until 1968, when it all changed.

During the late 1960s the city planners thought it would be a better idea to route a new interstate, not through midtown, near Vanderbilt University as originally intended, but rather through the heart of the North Nashville African American community, cutting off the vibrant Jefferson street and its vital businesses from the neighborhoods.

Diverting the new massive highway system through black neighborhoods was not unique to Nashville. It was a trend occurring at the time in major cities across the country. A trend law professor Joseph DiMento, co-author of Changing Lanes: Visions and Histories of Urban Freeways describes it as “a racially motivated desire to eliminate what people called ‘urban blight.’ The funds were seen as a way to fix the urban core by replacing blight with freeways.”

Not surprisingly, shortly after the construction of I-40 was completed, the majority of the essential businesses and families in the area suffered financially. Many businesses were forced to close their doors and families had to move. Property values plunged more than 30 percent. The once-vibrant community no longer had much of a pulse.

As if that wasn’t bad enough, the residents of North Nashville, through the discriminatory practice of redlining were turned down for mortgages and business loans, while outsiders using government-backed loans purchased the land and opened their own businesses, mostly corner gas stations with inflated gasoline and food prices, and liquor stores. These business owners often treated the community of which they operated their business with scorn.

In those days, black residents had few options of where to go. Relocating to the suburbs was nearly impossible because it was forbidden for many suburban homeowners to sell their homes to African Americans due to racially restrictive covenants. Restrictions like these, popular at the time, were defined in one 1946 publication as “agreements entered into by a group of property owners, subdivision developers, or real estate operators in a given neighborhood, binding them not to sell, lease, rent or otherwise convoy [sic] their property to specified groups because of race, creed or color for a definite period unless all agree to the transaction.”

The War on Drugs

In the 1970s, the “War on Drugs” made it illegal to have a dime bag of marijuana. Extremely low-income residents in the North Nashville community had been intentionally corralled into or around public housing which resulted in a concentration of poverty and increased violence and drug use. The North precinct was fully-funded to apprehend these “drug dealers” which led to zip code 37208 becoming the number one zip code in the country for most persons incarcerated.

Number one in the United States. Let that sink in. 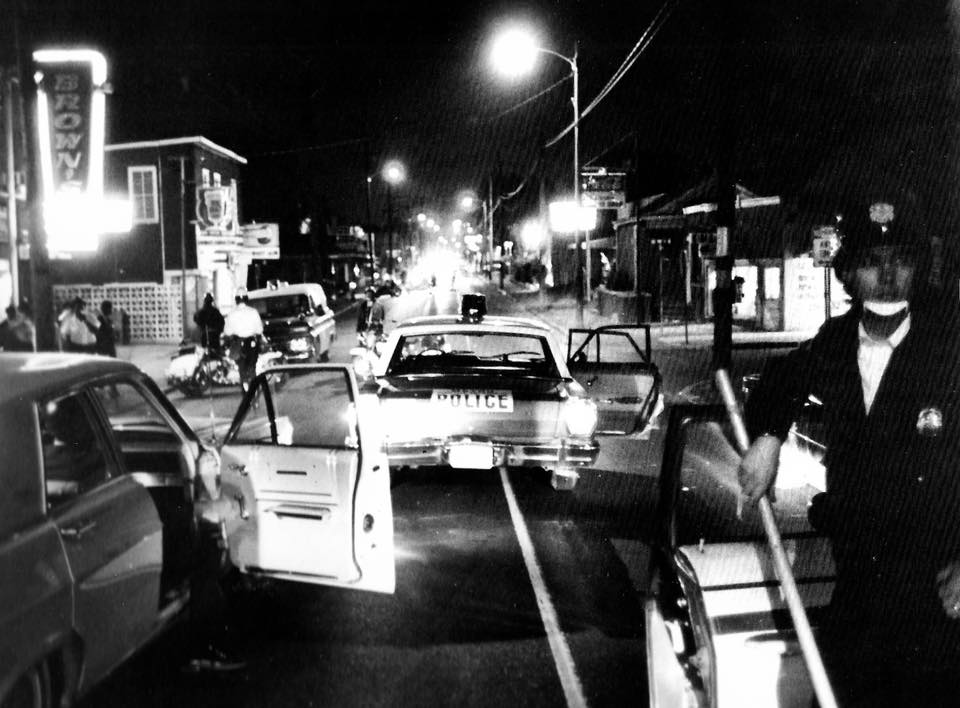 As if it wasn’t bad enough, the city’s new urban renewal plan, Nashville Next, which would take the city through 2040, laid out the future of Nashville and where the hottest locations would be. On the hot list were 12 South, Lafayette Street, The Gulch, and North Nashville. In North Nashville these neighborhoods would later become part of the downtown District 19; Germantown, Salemtown, Hope Gardens, and Historic Buena Vista which were majority African American. Later on, more neighborhoods beyond District 19 were added to the list including Elizabeth Park, Osage-North Fisk, Cumberland Gardens, Jones/Buena Vista, and Buena Vista Heights. All these neighborhoods had two things in common: they were all once majority African American and located in the 37208 zip code.

When the first 20-year plan was established in 2000, the goal was to “revitalize” these neighborhoods. Well, we all know what that is code for.
Part of this “revitalization” focused on displacing the communities’ long term residents . First, there were codes citing and demolishing every home, many historical. Then came the long period of arresting African Americans in this zip code. Nashville’s North precinct initiated what were called Flex teams that would await under the overpass on Arthur street and pull over and harass drivers regularly for anything they could find: outstanding warrants, drugs, weapons, anything.

This was one of the last stages of purging of the black community. Afterward, in 2016, development moved in. Once they gentrified the area as much as possible, only then did the city start making infrastructure improvements, redlining was removed, and the police backed down. This began the race for developers to purchase as much land as possible, giving way to gentrification on steroids.

The bottom line is the city destroyed a community and gave nothing back to improve it. This brings us to the present.

My life’s work is mindful of the racial and economic disparities enforced upon our once-prosperous black community. I believe that true revitalization of our community starts with affordable housing and sustainable community building. Together they are critical in the effort to increase opportunity and generational wealth for all of our neighbors.

I believe we can achieve this though a Social Impact Fund, an investment pool of funding which would allow affordable housing organizations like ours to have funds readily available to make competitive offers on property as soon as they hit the market. That may be a lofty goal for the city on a grand scale, but for Be a Helping Hand it is an achievable goal and the time to do it is now. Readily available funds, as opposed to making grant applications when properties become available, are a crucial component for providing the affordable housing our city needs. If we can’t compete with for-profit developers for housing, then far too many of our neighbors will suffer unnecessarily from displacement.

Our city’s Barnes Housing Trust Fund is another avenue to keep housing affordable in Nashville. However, its funding has recently been reduced from 10 million to 5 million. Introduced decades ago by Rev. Bill Barnes and a small group of nonprofits, it took root in 2013 when Mayor Karl Dean announced the allocation of three million dollars to the fund. At that time Be a Helping Hand and a few other nonprofits enlisted the help of Mary Brooks, National Housing Trust Fund Advocate, to assist us with pushing through our affordable housing plan for Nashville. Together, we crafted what is known today as the Barnes Housing Trust Fund.

Fighting for the people we serve and providing affordable housing in Nashville is an uphill battle we tackle everyday. More support is urgently needed from the state government, local government, business, and the philanthropy community. We will not give up. Be a Helping Hand will continue our mission of helping to protect and strengthen the culture and spirit of North Nashville by making sure our neighbors are not displaced from their own communities in the name of “progress.” 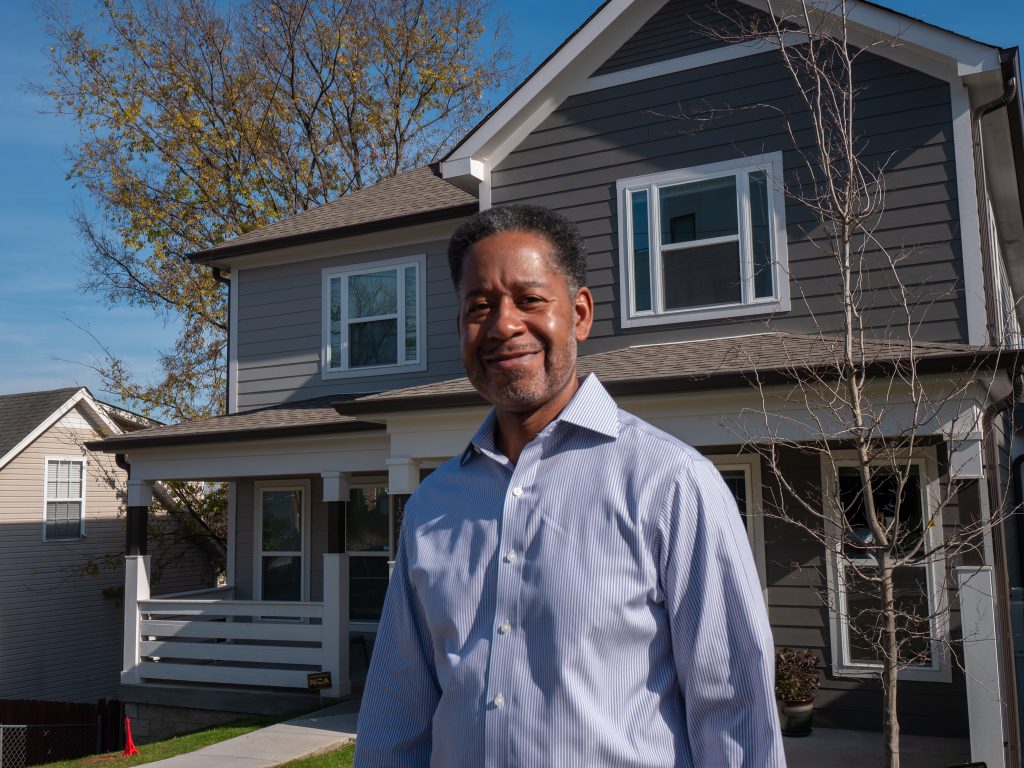 Long-term resident and active community member of North Nashville for more than  20 years, Mark Wright appreciates the importance of serving his own community. He served as President of the Historic Buena Vista Community for over 10 years, as well as multiple boards and committees. He holds a degree in Architectural Engineering and has more than twenty-four years of experience in the construction industry. His business experience includes ownership and operation of an Engineering and GIS staffing augmentation company.

Be a Helping Hand Foundation is a Tennessee-based nonprofit, 501(c)(3) organization. All donations are tax-deductible to the full extent allowed by law.